In 1976, the entire country was participating in Bicentennial celebrations. Patriotism was surging. The future mega-corporation Apple is founded, NASA lands the Viking 1 spacecraft on Mars. “American Made” became a slogan for such things as; “Charlie’s Angels” and the Farrah Fawcett hair-do, “Rocky” and it was the beginning of the work-out craze.

Globally, we watched as Nadia Comaneci scored perfect tens at the Montreal Olympics, and France introduced the Concorde and supersonic air travel. Closer to home, Iron Mountain is chosen by Kraus-Anderson as the prime location for a mid-sized Mall. Anchored by the hometown favorite Red Owl grocery store, and filled to capacity with other popular local merchants to include; The Drug Store, Ginny’s Hallmark Store, Radio Shack, and Lolita’s Closet, to name a few.

Understanding that the Midtown Mall will be a community center for both the central Upper Peninsula and north-east Wisconsin, Kraus-Anderson created a grand opening not to be rivaled. The four day celebration included the new Howdy Doody puppet show, a Howdy Doody look-a-like contest, a prince and princess parade, and a two-day dance marathon!

The Midtown Mall quickly became a destination. With an enclosed hallway, the Upper Peninsula weather takes a back seat to shopping and dining at the Mall, and their events calendar is constantly giving the community free opportunities to get together.

The Midtown Mall lives up to its moniker as "the Mall with something for all." To this day, the Mall continues to offer traditional shops and services with a local flare. And as the Mall looks to the future, from Kraus-Anderson to each store, we continue to honor our tradition of connecting with our entire surrounding community in a variety of ways. 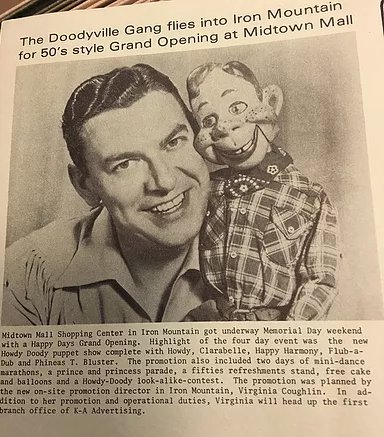